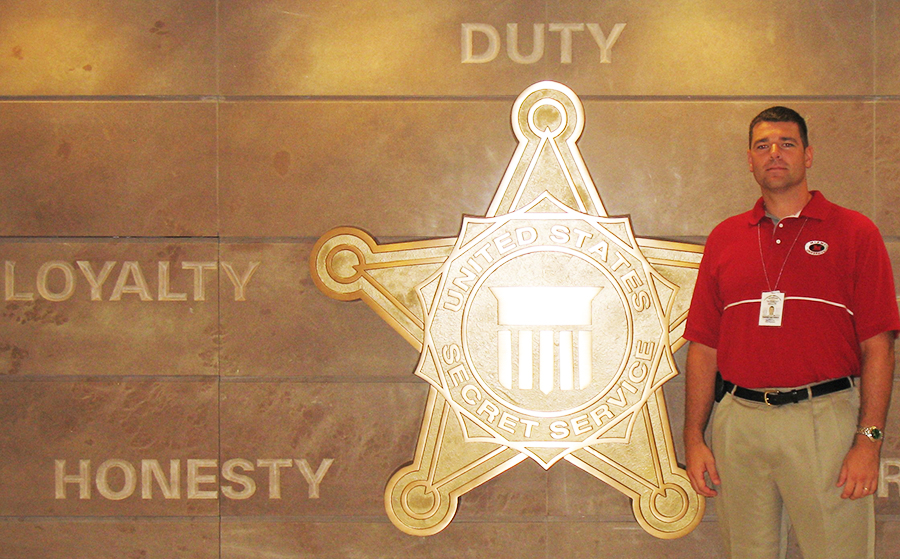 Miami University announced today that Stephen VanWinkle will serve as its new chief of police, effective Aug. 1. VanWinkle has been an officer and leader in the Miami University Police Department (MUPD) for more than 22 years, serving in supervisory roles the past 19 years and as captain and operations commander for the past six years.

"We are fortunate to have a nationally recognized public safety department that is committed to developing strong leaders,” Miami University President Gregory Crawford said. “I am thrilled that Stephen VanWinkle will have an opportunity to lead the department and continue its success after so many years of service and dedication to Miami University and the safety of the campus community."

“As the times change, police departments should also change to reflect the needs of the community,” VanWinkle said.

To better ensure MUPD hears these needs, he regularly works with student groups and organizes opportunities for officers to get to know students. He has worked closely with the National Pan-Hellenic Council, the Diversity Affairs Council (DAC) and the Center for Student Diversity and Inclusion on several policy issues and social events.

He has organized training and presentations for groups supporting LGBTQ students, international students, students of color, and assault survivors. He has also supervised the Police-Student Advisory Board and MUPD Police Student Internship program.

“I think it’s important that students know that MUPD is a resource for them, not just a law enforcement body,” VanWinkle said. “We are approachable and open to collaborating with them on programs to help our students and community stay safe.” 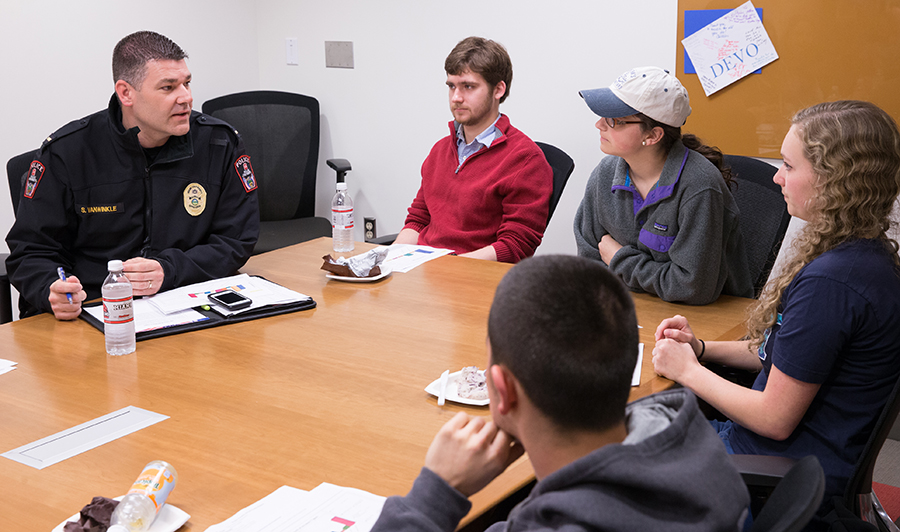 VanWinkle speaks with members of the Student Advisory Board.

VanWinkle restructured MUPD’s community relations team to do more community outreach programming on campus, now offering more than 100 programs each year for students, faculty and staff. He has partnered with various student and university groups to develop and support campus safety campaigns, including working with HAWKS Peer Health Educators and the Office of Health Education for "If You See Something, Say Something," and “Choices & Challenges Alcohol Awareness and Sexual Assault Prevention program.”

“I encourage all of our officers to be open-minded and willing to learn from our community and student body,” he said. “When students leave an interaction with the Miami University Police, it is my hope that they leave with increased knowledge, feeling heard, respected and a part of our community.”

In his current role as MUPD Captain, VanWinkle manages personnel hiring, officer training and scheduling and represents Miami University when negotiating with the Fraternal Order of Police and City Police Collaborations. He also serves in place of the police chief on the Institutional Response Team and the Environmental Safety and Risk Management Committee. He supervises and ensures compliance for the Uniform Division, which consists of six patrol sergeants, 14 officers, a special response team, the K-9 bomb Unit, and digital forensics and electronic crimes. 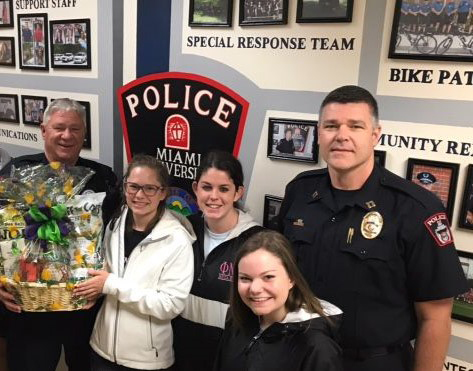 VanWinkle with his father, Greg VanWinkle (left), receive a gift basket from the Interfraternity Council and Panhellenic Association.

VanWinkle prioritizes education for his officers and himself. He earned his bachelor’s and master’s degrees in criminal justice at Miami, and completed the Northwestern School of Police Staff and Command program. He has participated in other specialized training and educational opportunities, including those with the FBI National Academy and the Secret Service.

VanWinkle has received several honors, as well as commendations for his management of special events on campus, including concerts, sporting events, and dignitary visits. He was named the 2020 MUPD Employee of the Year, the Excellence in the Community Award (Alpha Phi Alpha), Helping Hand Award (Alpha Kappa Alpha), and the Outstanding Performance in Criminal Justice award (Miami). He was also elected the Ohio Police Academy graduation speaker in 1998.

“While a national search yielded a strong pool of candidates for the position, the best person to serve as Miami University's chief of police was right here in the department,” said David Creamer, treasurer and senior vice president for finance and business services. “I am excited about the opportunity to work with Stephen VanWinkle on continuing the development of the Miami University Police Department as a national model in university policing.”

VanWinkle said he is excited to step into his new role at Miami, where his roots run five generations deep and just as wide. Members of his family have worked in various departments throughout the university, including his father, whom he worked alongside for 20 years.

“My favorite part of working at Miami is the community we have here,” VanWinkle said. “There’s a closeness here that you don’t find in other places. The college campus atmosphere is great too — the student body, the athletics, the energy.”

VanWinkle said he and his wife, Kelly, also appreciate that they can share their “Love and Honor” with their son, who is currently attending Miami, and their daughter.